Aika Zero
These three girls are students at St Aero academy and all three of them want to join the White Knights.

The three girls are seen at the beginning of the episode getting inspected by Yui, Nanami and Misaki. They are told this is part of the process to join the White Knights. However this process is an excuse to feel their bodies as the three knights touch the recruits chest, legs and ass. Although the three girls blush at this it is evident that they are uncomfortable with this. However the alien tendrils quickly appear and penetrate the three recruits from behind which enlarges their buts and leaves them with a star shaped mark, afterwards the three are scooped up in OTS carries and Miyu tells Yui, Nanami and Misaki they pass. The three unconscious recruits are then taken away by the tendrils.

The Blonde recruit blushes after Misaki compliments her chest 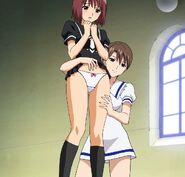 The alien tendrils prepare to knock the recruits out

At the mercy of the Knights Trio

The first of many ots carries in Aika Zero

The three recruits on display for Miyu 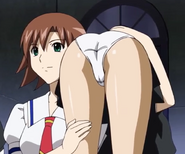 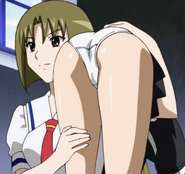 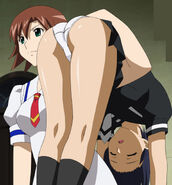