Waitress Delmo (ウェイトレスデルモ, Weitoresu derumo) is a Blue Delmo member. She is first seen in Agent Aika: Break the Decisive Battle! Delmo Base!

After Sania and Tonia blow up the K-2 Building, Michikusa Shuntaro "introduces" Maypia Alexymetalia to Rion Aida at a diner. There they plan their surprise attack on the Delmo Base as revenge, not knowing that the waitress who shows up to take their order is a disguised Delmo.

Now aware of the group's plan, she proceeds to ambush them at sea with a unit of RPG wielding Blue Delmo mounted on hovercraft interceptors. Rion and the rest being on a slow and completely defenseless ship, she succeeds in easily sinking the protagonist's ship.

However, her victory is short lived, as Aika proves to be very well alive and attacks the unsuspecting Delmo as they return to the safety of their base. The waitress Delmo is then knocked out off-screen by Aika Sumeragi's Shivie's form, together with the rest of her squad. We see her for the last time sprawled on the ground alongside 2 other Blue Delmo, laying face down with her legs wide spread.

It is in this state Rion and the rest find her, much to their surprise, when they wake up. Ignorant of the details of the girl's defeat, they just proceed to take her weapons and proceed their attack, leaving her where she lies. They do not seem to recognize her at any point. 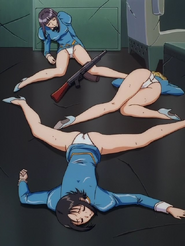 Add a photo to this gallery
Retrieved from "https://aika.fandom.com/wiki/Waitress_Delmo?oldid=9324"
Community content is available under CC-BY-SA unless otherwise noted.