Swirly Glasses Delmo has short brown Hair. She is noted for wearing swirly glasses. Aside from her Black Delmo uniform, she is also seen wearing office clothes and a green lab coat.

She is first seen during the events of Delmo Operation: White Silver passing herself off as part of the airbase's staff. It is here she has the illustrious honor of being the only Delmo to carry Aika Sumeragi while she's unconscious and, later, she is even lucky enough to be able to assist Golden Delmo Rie Petoriyacowa with her humiliating tests on the unconscious Salvager. Sadly for the poor girl, after this brief moments of glory, it's all downhill for her.

After Rie is put in a sleeper hold and knocked out, Aika and her group quickly head to the Data Room, where a panicked Swirly Glasses is desperately trying to retrieve the disk containing all the Salvager's data. Regretfully for her, she is not fast enough, and by the time Aika enters the room she is only just managing to grab the disk before even attempting to make her escape. The quick appearance of the Salvager startles the poor girl, who gasps in fear as she suddenly finds herself cornered and outnumbered. Moved by panic and desperation, Swirly Glasses still tries to make a run for the exit in a poor attempt at fleeing. Nervous, she first starts by moving slowly towards the door before giving in to a full anguished rout. However, despite her best efforts, she is still easily intercepted by Aika before getting far.

We do not get to see exactly what happens after, since the camera decides to focus on the reawakening body of Rie, but even from our distant position on the next room we can still hear her loud yelps and moans of distress as Aika subdues her. Since the Salvager is already aware of the girl's involvement in her previous humiliation, we can certainly expect her not to go easy on the Delmo, no matter how defenseless. The flurry of anguished cries is then culminated with the loud sound of a body hitting the floor, as we can assume Aika manages to pin down the girl on the ground.

When the camera finally gets back to Swirly Glasses, she is, as it could be expected, a more than pitiful sight: utterly beaten and subdued on the floor, barely conscious and trembling, with her face down and ass up. Shaking uncontrollably, the poor girl can do nothing more than emit a sad continuous moan as she feels all strength quickly leave her body. She then lets out a last disconsolate whimper as she finally goes unconscious for good, her lower body unceremoniously crumbling to the floor, hiking up her skirt in the process.

After she's been put down, the camera indulges in getting several different shots of the poor girl's ass as she lies beaten in this rather unladylike position. First, one from behind and right between her wide open legs as Rie gets away with the data. Then a second one from the side as Aika jumps over her knocked out body to go after Rie. To wrap it up, we also get a shot in which we can see for the first and only time her face without the glasses, since it appears they were knocked off either in the preceding struggle or as as she crumbled to the floor. We can also appreciate at this moment that her encounter with Aika has left Swirly Glasses blatantly out cold, with her mouth wide open and drooling heavily. 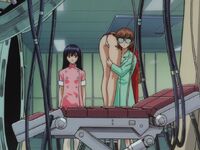 Swirly Glasses in shock as she is discovered by Aika

Swirly Glasses collapses unconscious after Aika is done with her 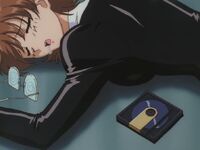 The dats next to Swirly Glasses' unconscious and drooling body

A view from behind as Rie retrieves the data 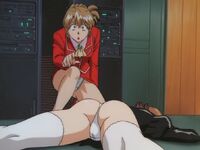 Aika in shock next to a knocked out Swirly Glasses

Full body shot of Aika draped over the Delmo's Shoulder