Shuntaro Michikusa (道草 旬太郎, Michikusa Shuntaro) is a graduate from the Salvager training school with barely passing grades, he joins K2 Corporation through a relative. His father is the president of a major salvaging company.

Feminine but air-headed, Shuntaro is prone to crossdressing as well (including donning Delmo Corps staff uniforms on several occasions), and using a kappa doll and squeaky voice to try cheering up Rion is down, which earns him frequent beatings by Rion because he only succeeds in annoying her. He cheers on Aika when she fights. 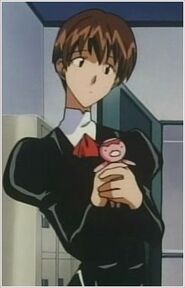 Retrieved from "https://aika.fandom.com/wiki/Shuntaro_Michikusa?oldid=9375"
Community content is available under CC-BY-SA unless otherwise noted.