Saori (さおり) is a member of the Black Delmo with blonde hair fashioned in twintails.

First seen with a group of fellow Black Delmo in civilian clothing at the Hotel the K-2 Corporation were visiting on their vacation during the events of The Golden Delmo Operation. In this occasion, she wears a short backless cream coloured dress with matching high heel shoes.

Later she is present when the Delmo reveal themselves before Aika. Together with Kana, she escorts the salvager to the balcony to witness Rion and Shuntaro's execution, and is too slow to stop her when she jumps to save them. This mistake will be costly for her, as well as the rest of her friends, being the first step in the failure of the carefully planned operation, which will end with all Delmos blatantly beaten.

After Aika manages to compose herself and reunite with Rion Aida, Saori and a unit of Black Delmo chase them down to a kitchen where they begin fighting. As Aika takes care of the rest of the girls, Saori ends up comically struggling with Rion. At first both girls find themsleves in a deadlock, unable to gain the upper hand over one another. Eventually, however, Rion finds a way to break the stalemate by hardly stepping on Saori's foot. The shocked girl moans and closes her eyes in anguish as she starts to bend at the waist in reaction to the unexpected hit, inadvertently letting Rion of her sight for just a few seconds. The young disciple of Aika is fast to take advantage of the situation and falls slighlty back, only seeking to gain more momentum to then land a devastating blow to the distracted and defenseless girl as she still tries to recover. The impact hits Saori square in the face before she can even realize what's happening, causing her to crumble to the flloor out of comission as her nose releases a gush of blood.

Saori's incapacity, despite being a trained soldier, to even take care by herself of Rion, will be yet another fundamental mistake of hers that will lead to the failure of the operation. Now at large, Rion will be able to come to the aid of Aika, who somehow had been pinned down and was on the verge of defeat by Ai. The poor girls's efforts will thus be deemed worthless, as just when she is about to dispatch the salvager once and for all, she is unceremoniously put down with the unexpected blow of a frying pan to her head, her unconscious body collapsing over Aika as she releases a sad moan. 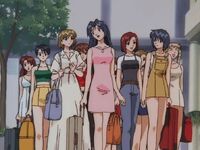 Group of disguised Delmo girls (Saori is on the far right)

Retrieved from "https://aika.fandom.com/wiki/Saori?oldid=9228"
Community content is available under CC-BY-SA unless otherwise noted.