Sae has light brown hair. Alongside her Black Delmo uniform, she is seen in casual clothes including white V-neck T-shirt, red shorts and white sneakers.

Sae was in group of Black Delmo led by Black Delmo Leader which attacked Aika and Gust in the underground parking lot. She was knocked down by Aika's electric shock baton, being the first Delmo disabled by Aika.[1]

Later she is seen during unsuccessful attempt by Delmo Corps to eliminate Aika during her vacation at Peroronka Island. She, Yuki and Ai lured Shuntaro Michikusa to a trap and captured him. After some time Sae appears again, as she stands beside a pool together with Yuki and tied Rion Aida and Shuntaro. She kicks Rion to the water, while Yuki does the same thing to Shuntaro. However, Aika suddenly jumps from the hotel balcony down, and attacks them. Sae tries to hit Aika with her leg kick, but misses, and Aika hits her right in her face with her fist, sending her right to the pool.[2]

Sae and Yuki behind Aika

Sae, face down and butt up, among other comrades

2nd round against Aika

"This is not good"

2nd defeat at the hands of Aika

Off into the pool she goes 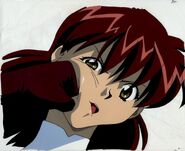 Retrieved from "https://aika.fandom.com/wiki/Sae?oldid=9234"
Community content is available under CC-BY-SA unless otherwise noted.