Rudolf Hagen (ルドルフ・ハーゲン) is the evil mastermind who, even though contracted by the military to find the Lagu, wants it for his own ends.

Rudolf believes that Lagu is something the Earth produced to destroy the humanity that polluted it. He enjoys commanding his army, especially the bridge, and is passive but calculating. He plans to repopulate the Earth with his own progeny conceived with his Delmo staff.

Rudolf was born as a genetically altered test tube baby, in the process he received superior genes. Because of that he yearns for superior women to impart the genes to his next generation. It is not clear if Neena Hagen is his biological sister or simply another test tube baby with no blood relation.

When Rudolf picks Aika Sumeragi instead, Shivie Neena (Rudolf's creation) kills him in jealousy. He is then set off into space with Neena and they weren't never seen again in the series as it is possible that they both died from unknown causes. 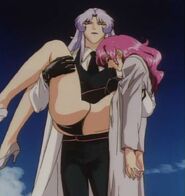 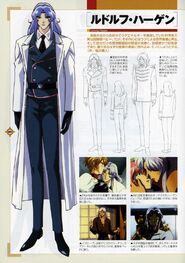 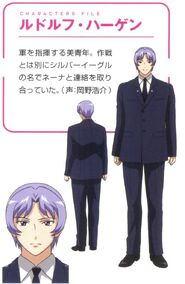 Retrieved from "https://aika.fandom.com/wiki/Rudolf_Hagen?oldid=9377"
Community content is available under CC-BY-SA unless otherwise noted.