Atsuko Tanaka (Japanese)
Suzanne Savoy (English)
Suzy Prue (English, ep. 3-4)
Neena Hagen (ネーナ・ハーゲン) is a test tube baby like Rudolf Hagen where it is unknown if she is the blood sister of Rudolf. Nevertheless, she respects and loves Rudolf dearly to a level beyond siblings that she dislikes Aika Sumeragi for "seducing" her brother. A sadistic character and unstable mood, she walks around in her bare essentials and makes sure the Black Delmo girls are punished for their failure.

Neena's main appearance is rather plain with upper back-length pink hair that has ringlets on her small hair strands with bangs hanging on the right side, purple eyes and large breasts.

Neena is spoiled by Rudolf Hagen (Neena's brother) to the point where she is devoted to him to an incestuous degree. She is very sadistic as she enjoys physically disciplining her subordinates and she also has a jealous side as she immediately dislikes the beautiful Aika Sumeragi for seducing her big brother and the attention Rudolf gives Aika.

Neena later receives from Rudolf Hagen an Alternate (Ultranate) Metal panty which allows her to transform to a powered-up form Shivie Neena (the opposite of Aika Sumeragi's bra). She had similar power to Aika, but it went out of control and she went mad with power. However, the device fusing into her soon runs out of control and she becomes a hideous monster. In this form, she embraces and kills her brother and flees into space cradling his corpse where her ultimate fate is unknown. Her appearance is also in reverse with Pale skin, symmetrical look and red appendages.

In Neena's first appearance, she is disguised as a secretary. However, upon dropping the disguise, the Black Delmo Leader begs her for forgiveness and Neena responds by kicking her in the chest, causing the purple haired woman to drool and lose consciousness. Neena then pulls the Delmo up by her hair and drops her on her shoulder followed by slapping her ass and then squeezing it. After talking to Aika, she and her Blue Delmos take the Black Delmos back to their base for punishment.

When Neena's super form backfired on her, she cried for Rudolf Hagen's (Neena's brother) help. When she saw Aika Sumeragi, she lunged at Rudolf and takes him with her as he dies.

When Miyu's plan fails and E.T.A.I. is knocked out, Neena enters the room and knocks her out. She then takes Miyu to Rudolf Hagen (Neena's brother). 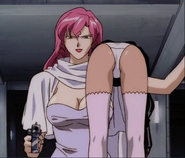 Full body shot of the leader draped over Neena's shoulder

Neena loves to punish the delmos.

Neena swallowing Rudolf Hagen before blasting off into space