Misaki was among the group of Black Delmo which attacked Aika Sumeragi and Gusto Turbulence in the underground parking lot, led by the Black Delmo Leader. She attacked Aika after Sae and Yuki. She tried to kick Aika with her leg, but Aika blocked her strike. grabbed her leg and knocked Misaki down a knee strike right to her abdomen.[1]

Afterwards, Misaki reappears during the unsuccessful attempt by the Delmo Corps to eliminate Aika during her vacation at Peroronka Island. She, Eri and Naomi captured Rion Aida. Misaki distracted Rion by asking to her way to the elevator, and before Rion reacted, Eri and Naomi pulled her to some hotel room. Some time after she is seen drinking coffee at one table with Eri and Rika at hotel's restaurant, discreetly observing Aika and "Pierre Valimore" sitting at another table nearby.

After some time she is seen again as part of a Delmo group, this time led by Bianca, which confronts Aika in her hotel room, revealing their true identity. However, Aika manages to escape from them by jumping down from her room's balcony, freeing Rion and Shuntaro Michikusa in the process, so Bianca's group begins a pursuit. After some running, Aika and her friends are forced to fight the Delmo in the hotel's kitchen, making quick work of all of them. Aika knocked down Misaki with her fist strike after she disabled Eri. [2]

Black Delmo A, Ayumi(?), Naomi and Misaki before their attack on Aika 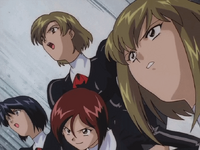 Misaki gets darted by Aika

Retrieved from "https://aika.fandom.com/wiki/Misaki?oldid=9571"
Community content is available under CC-BY-SA unless otherwise noted.