Sakiko Tamagawa (Japanese)
Rachael Lillis (English)
Maypia Alexymetalia (メイピア・アルキメタリア)  a "Class A" spy (who carries suitable business cards) employed by the government to retrieve information on Lagu by infiltrating Hagen's army dressed as a Black Delmo. She runs into Rion and ends up following her much to her annoyance.

After having been abandoned by her employers and her subsequent rescue by Aika and her friends, she went freelance. She reappears in Delmo Operation: White Silver, where she joins Rion and company in their assault on the Delmo base.

Maypia has red hair. Her iconic outfit is her Black Delmo uniform, which she wears a skintight black dress with white around the collar and a red ribbon, with white thigh-high socks, white panties and black high heels. 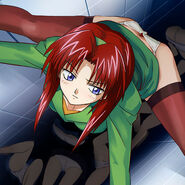 If only this was in the show

Maypia and Rion as Black Delmos