Karen Minamino is a supporting Protagonist who first appears in AIKa R-16: Virgin Mission and returns in AIKa Zero.

Karen has long dark blue hair in AIKa R-16: Virgin Mission and yellow eyes. Her main outfit through R-16 Virgin Mission consists of a short sleeved, purple, buttoned shirt, and a short purple skirt. Unlike most characters in the series, who wear white panties, she wears pink ones. She also has a purple butterfly on her left breast. In a flashback by the pool, she was shown sunbathing topless wearing a red string bikini and a sun hat.

In the photo on the desk of the Mysterious man, a very young Karen (roughly 5 years old) was shown with short hair, a light orange sleeveless top and a light tan skirt. Standing next to her was an unknown boy her age or slightly older, probably the mysterious man holding the photo.

In AIKa Zero, she had her hair cut short and wore fake glasses as a disguise. She switched between a catgirl maid costume, a black school uniform, and a stolen Hamlet Actress costume.

Send in the clones

Karen is one of many clones produced by a shadowy organization. She was first seen in front of an orphanage and stated to live as an normal kid but is constantly spied on by people in her life.

Due to her low social skill, she has little sense of personal space. 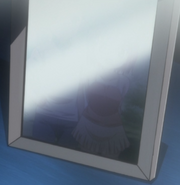 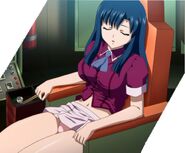 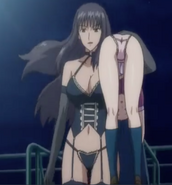 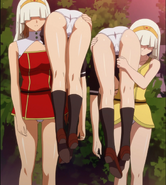