AIKa R-16: Virgin Mission
Karen's cloned sisters appear in Trial 3: Deep Blue Girl and speak in musical tones. They live deep in an abandoned undersea lab. Because Karen and her clones never age past a certain point, none of them are likely to be the age they appear to be.

Nine girls with different clothes and hairstyles. Almost all of them wore skimpy outfits, mostly nothing but their underwear and lingerie with black socks. Some of them also wore pink panties like Karen. They first appeared when Eri and Aika were investigating a computer terminal in the cloning room. They attacked with screwdrivers and pocket knifes, trying to force the intruding pair to leave.

The clones had superhuman athletic ability, able to leap clear across large rooms in single bounds or skip in long floating arcs in defiance of gravity.

None of the clones seemed to be able to make normal speech, instead making strange musical noises when talking to one-another. Despite this, they showed to still be able to make gasps, moans, choking sounds and yelps like normal girls as they were subdued and beaten by Aika.

In order, each or the girls was defeated in the following manner 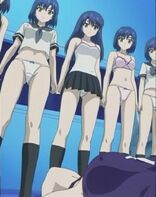 Official artbook profile of the Karen Clones, lower half of the page. Rough translation reads: "Clones identical to Karen, who were left sleeping in the sunken undersea airport. They try to eliminate any "foreign objects" that intrude on the facility. Appearance wise, their growth stages were various, and an individual exceeding 10 meters also existed. The Karen clones spoke with a special musical tone, which Karen herself could also speak."

The smallest clone, she vaguely appears to be a preteen girl. Standing eye level with Eri's stomach, she is about the size of a typical six year-old. She wears a hip-length, dark blue chemise with a white bow on her chest, and white bobby socks. Under her skirt she wears the same white bow panties as the majority of prequel girls, hers having a blue bow. Because of her small size and cute appearance, she wasn't very threatening and was easily underestimated.

It is unknown if Little Karen's small body is an accidental defect, her creators designed her to look like a child, or she actually is one. The few official words on the age of any of the Karen Clones seems intentionally vague.

She first appeared while Aika was distracted fighting the other clones. Eri didn't take her seriously and told her to get out of her way, but Little Karen waited until Eri walked past to jump in the air and knock her out with a kick to the back of her neck.

Aika noticed, but was too busy being attacked by the other clones to help. Little Karen then entertained herself for a while by pulling and poking Eri's cheeks. Eventually Eri began to wake up and Little Karen pulled out a knife to stab her. By this time Aika had finished defeating the others and threw a screwdriver at the small clone's wrist to distract her, then demanded she leave Eri alone. After staring at Aika for a moment, Little Karen leapt across the room to attack her.

Aika easily countered with a leap of her own, intercepting the clone mid air and delivering a brutal kick to her gut that sent her flying backwards after quite literally almost bending her in half. While she soared through the air screaming in anguish, her short dress lifted up and billowed open, exposing her body below the chest and her right breast. She lands hard on her back next to Eri, bouncing as she hits the floor and being left with her skirt hiked up and knees raised, legs wide spread and feet on the floor. The brutal impact together with the girl's screams scare Eri out of her stupor and rouse the older girl to get up, contemplating in shock the petite warrior she now has lying defenseless by her side. Little Karen is not yet done, however. Though stunned and dazed, the resilient girl is still somehow conscious. She then proceeds to lift her head and stare ahead in Aika's direction, in a seeming attempt to check on the Salvager's position while maybe she tries to recover and get up. Unfortunately for the little girl, her focus on Aika leaves her oblivious to the much bigger threat that represents Eri's location right to her side. Eri is fast to take advantage of this situation, and as the clone stares distractedly ahead, she ominously lifts her arm right above her head with a wild expression of revenge on her face. She then mercilessly swings her arm down on the vulnerable little girl, striking her neck as she yelps and widens her eyes in shock. Little Karen chokes and violently thrusts her hips high into the air with her legs spread, making her dress slide even farther up her body. She somehow maintains this highly strained position for some seconds, her whole body shaking uncontrollably, before finally passing out with a weak gasp. Her body then unceremoniously crumbles to the floor, falling back down with her chemise hiked up all the way to her chest, panties fully exposed with the camera aimed between her wide open legs.

Eri pauses for a moment before she looks up at Aika and lets out a relieved giggle, fist still embedded in her victim throat. Aika smiles and replies with an excited "Nice!" in congratulation for finishing off the little girl clone, only to gasp in shock and take on a frightened expression right after. Eri then stands up over the defeated Little Karen and starts to jokingly chastise herself for underestimating the clone because of her size. This is when Giant Karen grabs Eri as soon as the puny human turns to see her.

The final time Little Karen is ever seen is a distant low-detail shot from outside the cloning lab as Aika was trying to pull Karen out of the scanning table and escape Giant Karen. Little Karen is alone on the far right side of the room opposite all the other clones. This is the only scene with all the Karen Clones visible at once.

She is the last enemy girl defeated in R-16, the only girl ever knocked out by Eri, the smallest girl in the series, and possibly the youngest girl to appear in AIKa. The only contender for the last two distinctions is a little girl who briefly appeared in the opening tour boat scene of Agent Aika. A mention goes to the photo of young Karen kept by the Mysterious man, but that iteration of Karen never properly appears.

Her first pantyshot, while taking out Eri with precision. A strangely minimal amount of exposure for girls in this series.

Landing from her strike, still flashing a small glimpse. Get a good look, this is all she'll show you for a while. 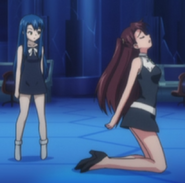 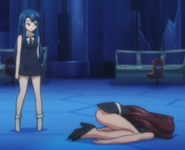 Eri down, for now.

Bored loli toys with her victim. Almost feels like the camera angles of her are being deliberately restrained.

Just when you hoped the little girl wouldn't cross the line. Or maybe you were? We know why you'e watching this show. 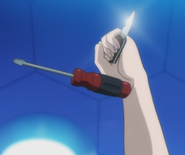 Hey, cut that out.

Little girl surprised at being interrupted. The forboding music sure lets you know this is it... 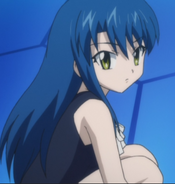 A brief moment of tension as she decides what to do.

The tiny terror goes for it. 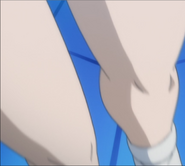 This series has never shown this much leg in a frame and refused to show panties.

Adorable even as she coldly tries to murder you.

But not adorable enough to spare her, or her modesty. Seems like an extreme amount of force to use on such a small girl.

Little one soars away.

Loli coming in for landing.

Little Karen, finally finished. Three episodes of teen girls spreading their legs on screen built up to this.

Eri stands over her one and only victim

The last time Little Karen is ever seen. Barely counts as her last pantyshot.

The largest and strongest of the clones. Due to her towering height, she is completely naked. Though her appearance was brief, it is safe to assume that she is the strongest character in the entire series, being the only enemy never KO'd and beating Aika with ease.

The Giant Karen makes her debut, ironically, just after the Little Karen had been defeated. She likely came from one of the two giant pods located at the front-right of the room and was overlooked by Aika and Eri due to it's placement and because they were busy with by the other clones. When Eri was still distracted with her surprise KO of Little Karen, the large clone came from out of nowhere and grabbed her. She then began to squeeze the life out of Eri, only to throw her unconscious body at Aika and walk towards them.

Aika grabbed Eri and tried to get out. She removed Karen from the scanning table, causing the doors she kept open with her body to start closing. However, Giant Karen's immense strength let her grab the doors and pry them open. Seeing no other option, Aika dared to try and fight the giant, kicking her fingers and frightening the huge clone for a moment. Aika then used the distraction to kick Giant Karen's toe, but this painful attack only enraged her. Too fast for Aika to react, the clone kicked her into a wall and knocked her out, causing her to fall to the floor face-down with her skirt flipped up. This is the first time Aika ever passed out in a manner like the many women and girls she has and will knock out in her life.

Before the giant could reach out and grab Aika, Karen herself woke up and stopped her by revealing that she knew how to use the musical clone language. Karen managed to convince Giant Karen not to kill her friends, and the large clone agreed to tell her about her origins. She then allowed all three of them to leave unharmed. She was also nice enough to pose for a photo with Eri, but she's so huge that only her leg was visible in the shot.

Giant Karen presumably cared for her unconscious smaller sisters after Aika's group left. All the clones then went back into hibernation as the facility shut down, seemingly for good. Why none of them chose to leave with Karen is unknown, but it's possible that Giant Karen was incapable of leaving by normal means due to her enormous size and her sisters didn't want to leave her behind.

All Karen clones, including the original Karen, are based on Karin Kikuhara from Stratos 4, another series from Studio Fantasia in which character designs were also handled by Noriyasu Yamauchi, with the Karen Clones with the shortest hair (B, C, G and I) having a near perfect resemblance to their counterpart.