E.T.A.I has an appearance of a girl with dark hair. She's the tallest girl in the series (except Giant Karen from R-16). Her breasts are the size of Aika Sumeragi's entire upper body

Not much is known about this tall, silent, beauty except that her super strength was enough to subdue Aika Sumeragi, bearhugging her with one hand on their first encounter and holding her up by the throat later on. She also possessed the same alien tendrils as Miyu Shiratori, who she has a close relationship. It is implied that Miyu was her first probe victim. The Alien tendrils seem to live within her, and she has a command over them. When facing Aika, she seems to have a preference for squeezing her unconscious, on their first encounter crushing her against her huge frame.

Near the end of Episode 3, she and Miyu Shiratori fight Aika Sumeragi in the chapel. In an attemp to finish off the Salvager, Miyu forms a large spike from the Alien Tendrils and hurls it at Aika. However, to her disbelief, Aika instead manages to catch it, and the spike changes color in her hands. Aware of it's potential, the Salvager then takes aim and violently throws it back at Miyu.

Startled, Miyu doesn't even try to dodge the incoming projectile, but just as she is about to be hit E.T.A.I jumps in front of her, pushing the girl down and out of harm's way. Sadly for her, she is not as lucky and ends up positioning herself right in front of the incoming shot as it comes barging in. The huge spike hits her straight on, impaling her through the rear and going through her whole body before the tip bursts out of her mouth, the rest probably being left lodged inside.

E.T.A.I. is left in total shock by the whole ordeal and just stays inmobile in the spot, her whole body trembling while she moans sadly with a blank expression and the remains of the spike slowly fade away, their job being done. We can see her mouth is wide open, with two big lines of fluorescent drool flowing from it. Several drops of this yellow liquid fall over Miyu's terrified face as E.T.A.I. bends over her. She stays like this for several seconds before finally going unconscious -- her eyes going vacant as her body slumps down on top of Miyu, legs spread apart.

During the credits of the last episode (Zero), an image showed E.T.A.I and Miyu Shiratori lying on separate beds naked and unconscious while Rudolf Hagen and Neena Hagen observes them. Further images showed them all having an enjoyable conversation, with the last image showing E.T.A.I and Miyu outside observing the stars.

It is unknown as to what exactly happened to E.T.A.I and Miyu, but it can be concluded that they were brought back to good health and eventually became friendly with Rudolf and Neena.

Later, she became the principal of a academy.

That must feel funny

That must feel really funny

That must feel funnier 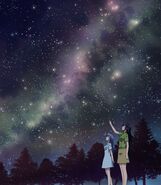 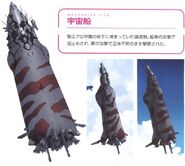