Thing do go as planned for anyone. Will Aika escape with her friends?

Rion and Shuntaro are being escorted up some stairs by two disguised Black Delmo, when the low angle of observation at one of the girl's skirts allows Rion to see the hidden uniform and realize they are being led into a trap. She then goes into a fit, grabbing the girl's skirt and refusing to let go. The other one tries to assist her friend, but between the two are still unable to control the raging girl. The struggle eventually sends all three girls and Shuntaro several floors down the stairs. When the fall is over, only Rion and Shuntaro remain conscious, both Black Delmo being left out cold. Rion then proceeds to examine one while Shuntaro steals the other one's clothes.

In order to gather live information about Aika's fighting skills, Rie has 4 Black Delmo charge at her. The first one, despite initial success, gets knocked out by accidentally hitting a bunch of lockers which are unable to resist the impact and collapse, taking the girl with them. A second one is sent flying into a pool of hot water after she tries to attack Aika when she is distracted. There she remains dazzled but still conscious. The other two girls prove to be a slightly harder challenge, and they spar with Aika for some seconds while Rie récords everything in excitement. Eventually, Aika gets tired and pretends to run from them, having both girls chase together after her from the lockers into the baths area. There she shows all her tactical talent by making quick work of the three remaing girls.

As she runs into the baths, Aika aims directly into the pools, where the previously thrown Delmo is slowly getting out of the water and trying to recover. As the poor girl is busy coughing out water, she is too slow to realize the approaching danger. When she does see it, she can only look in astonishement and terror as Aika jumps on the pool's edge, positiong hersel right on top of her. The camera then moves to a view from behind the girl, just as Aika lands brutally on her head, making her slump forward into another pool of water, bending at the waist over the pool's edge and lifting her butt in the air. Aika thus knocks her out while using her to gain the momentum to do a backflip that leaves her right on top of the other two girls, who were standing motionless in shock at the previous events. Both of them can do nothing more than contemplate in terror with their wide open mouths as Aika lands on top of them, smashing their heads together in a pincer movement with her legs. Done for, they then fall hardly to the ground together, one landing face up and the other one face down next to her, with her face right on top of her comrades left breast, as in a weird breastfeeding position.

After being led into a highly drunken state, Gozo is attacked by several Delmo. Despite this, and unluckily for the Black Delmo, he still shows a great capacity to fight back. He quickly knocks out one girl with a glass of whisky, and then a second one with a microphone blow to the head. When a third girl tries to attack him with a mop, he again makes quick job of knocking her out. A fourth then tries to surprise him from behind, but he lands a kick to her face and sends her flying through the air, landing with her legs wide spread. A fifth girl tries to hit him but he evades her and then head butts her in the stomach. Later, when Rion finds him, we see the bodies of 8 delmos sprawled around the room in several equally awkward positions.

Aika fights Rie in an attemp to recover the data she stole from her. Initially, the young girl proves to be a tough opponent, due to all the time spent analyzing Aika's moves. However, Aika manages to gain the upper hand by grabbing her by her long hair while she is focused in evading her blows. Surprised by the cheap move, Rie can only yelp as she is put into a chokehold. She fights for several seconds, lifting her legs and arching her back in an attemp to resist, before eventually going limp in Aika's arms. Aika then throws her unconscious body to the floor, whick falls with the skirt lifted above the waist, exposing the butt.

After taking care of Rie, Aika proceeds to the data room. Here she finds Swirly Glasses Delmo right about to make her escape with the information. The defenseless girl tries to make a run for the exit, but Aika easily manages to catch and overpower her. We can only hear her moans while the camera focuses on Rie's awakening, but by the time we go back to her, she is subdued on the floor, with her ass up on the air, still moaning lightly before finally crumbling down unconscious. As we get a view of the data lying next to her, we can see her drooling and wide open mouth.

Chasing after Rie, Aika first stumbles upon two unsuspecting Black Delmo who are casually chatting and of whom she quicky disposes with no effort.

Before any of the girls can see her, she quickly fires a tranquilizer dart at the first one, hitting her right in the butt. The por girl then releases a barely audible whimper before collapsing to the ground unconscious. Alarmed by the fall of her friend, the remaining Delmo goes into a panic, trying desperately to locate the source of the attack. Her efforts are in vain though, as Aika fires a second shot at her before she can be spotted. This time the dart hits the girl square in the left breast, causing her to gasp as she takes the impact, her boobs bouncing upwards in the process. She remains in shock for some seconds, her mouth wide open, before crumbling to the floor, falling on top of her previously knocked out friend.

Then, Aika faces a fairly tougher challenge, as a barricade of 7 armed Blue Delmo already aware of the situation is expecting her. However, she manages to gain the upper hand by resorting to a cheap tactic: using the last knocked out girl as a shield. Unable to shoot, the Blue Delmo can only watch as Aika closes the distance between them.

As she charges the group, Aika starts by taking care of the first 3, including the leader, with tranquilizer darts. With nowhere to take cover, they all fall as easy preys to Aika, hastily ending up sprawled on the floor with their skirts lifted and butts exposed. As she watches this, one of the remaining Delmo braces in fear of what's to come.

Before any of the other Delmo can react, Aika hastens to throw the unconscious Balck Delmo at them, gaining enough time to jump above the defenseless girls. She then lands directly on the back of one of them, dealing a demolishing blow which causes her to arch her back and raise her butt as her 3 remaining friends begin to react to what's going on. They are not fast enough, though, and Aika quicky finishes all of them before they make a move with precise blows to the neck, as they can only scream and moan in pain. The 4 girls remain motionless for some seconds, before releasing yet another moan and slumping to the ground unconscious, head first and with their exposed butts in the air.

With Rie on the run, the White Delmo Commander, the Adjutant and Nina Etsuko are the only thing standing between Aika and the data he wants to retrieve. Despite good fighting skills, Aika manages to dispose of the three of them.

She first takes out the Adjutant, knocking her out in what is arguably the best scene in the series. After hitting her in the head, Aika gets a hold of her as she is falling down and puts her in a chokehold. She then proceeds to increase pressure as the girl pleads and attemps uselessly to fight back, causing her to arch her back more and more each time while raising and spreading her butt. Eventually her neck gives out with a crack and the Adjutant falls unconscious, her body falling to the floor head first and ass soon following.

After the Adjutant is defeated, Nina Etsuko tries to hit the distracted Aika with a tranquilizer dart, but fails. She then goes into a panic for her failure and at the prospect of what's to come, screaming as Aika gets closer. She is grabbed by her off screen and then given a backbreaker. Surprisingly, she somehow manages to remain conscious and beg the Commander for help, but before the latter can do anything to help, Aika finishes her with an elbow strike to the stomach. She then slumps over Aika's knee, her head bent backwards and legs spread. The job finished, Aika then proceeds to throw her unconscious body to the floor.

With both her companions defeated, the Commander makes a final charge at Aika, but is stopped mid run by the realization Aika has a gun at her stomach. Smiling in acceptance of her fate, she does nothing as Aika fires and sends her flying across the room to land stomach first on the back of her own desk chair. The strength of the impact causes her to blush furiously and a line of drool to emerge from her mouth. The Commander still tries to fight for a few seconds, but eventually falls unconscious with a moan.

As Aika and the rest are trying to escape on Rie's plane, she appears carrying a portable missile launcher system in an attemp to stop them. However, as she is about to fire, Gozo fires a projectile at her, which hits her right in the stomach. The impact causes her to misfire, and leaves her lying unconscious in a suggestive position, with her body slumped forward and her butt sticking out, the short skirt hiked up and leaving it completely exposed. The episode ends with Aika feeling somewhat sympathetic for the Commander, and her crew.

Of all Agent Aika episodes, this is the one which features the highest number of on-screen knockouts, with a total of 26.

The Commander and the Adjutant in disguise.

Delmo in happier times, before the whole getting beaten part.

The evil ploy is revealed. 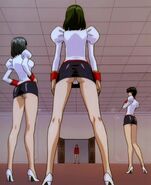 Aika's been here.
Add a photo to this gallery
Retrieved from "https://aika.fandom.com/wiki/Delmo_Operation:_White_Silver?oldid=8826"
Community content is available under CC-BY-SA unless otherwise noted.