Catherine (キャサリン, Kyasarin) is a member of the Blue Delmo with blonde wavy hair.

After this we see her being knocked out on a couple different occasions. The first one is by Maypia Alexymetalia, while she is on guard duty together with another Blue Delmo. On this case, Maypia unceremoniously dispatches the girl by kicking an airshift grid on her head. Catherine thus plummets loudly to the floor, where she lands unconscious flat on her chest. In this way, Maypia also uses the defeated girl as a decoy to get the other unsuspecting Blue Delmo to carelessly approach the spot, looking to aid her friend. Just as the remaining soldier begins to realize what's actually happpening and turns to face the attackers, Maypia leaves her out of comission with a brutal kick in the face which sends her crashing to the floor, face up and legs wide spread, skirt hiked up above the hips.

The second time is when Rudolf Hagen instructs Catherine to escort Rion Aida to her cell. This time, the soldier is able to almost fulfill her task succesfully, taking the prisoner to the door and getting her to enter without problems, even taking the liberty to berate her on the way there. However, things quicky take a turn for the worse as Catherine follows the handcuffed Rion inside the cell. It's unclear how it actually happens, but somehow the untrained teenager seems to be able to gain the upper hand on the supposedly experienced soldier and hastily reduce her. From outside the room, we can only hear a quick succession of blows as the poor girl screams in anguish. Next thing we know, Catherine has been mercilessly subdued, and is lying on the floor unconscious and half naked, with both her hands and feet tied. Rion then steals her uniform and weapon, and proceeds to leave the helpless girl in the cell she herself was supposed to occupy.

Up until this day the doubt remains whether Catherine is a total failure of a soldier or if she just grew too confident regardaing the combat capabilities of her prisoner. One way or the other, she is one of the few girls in the show to receive such a humiliating defeat at the hands of Rion, only partially rivaled by Saori.

Saori and Catherine are the two worst and most iconic cases of defeat at the hands of Rion, an untrained teenager who should barely be able to put up a fight in equal terms against experienced soldiers. Catherine bears the dubious honour of somehow having been reduced and knocked down by Rion while being fully armed and with the girl being handcuffed. However, being a Blue Delmo, we can assume her close combat capabilites are a bit lacking and her rifle is useless in small spaces. Thus, a brief moment of distraction or an excess of confidence could somewhat explain how she got unmercifully dispatched by Rion.

Saori, on the other hands, fights a fully operational Rion. However, being a Black Delmo, close combat is supposed to be her specialty, so it is still hard to explain how the teenager could manage to take her to a stalemate and even end up knocking her down without much difficulty. 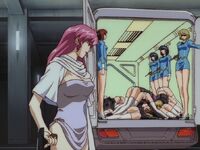 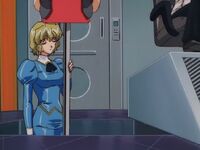 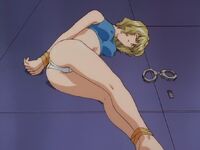 Retrieved from "https://aika.fandom.com/wiki/Catherine?oldid=9232"
Community content is available under CC-BY-SA unless otherwise noted.