Blue Delmo U (青デルモＵ, Aoderumo U) is a Blue Delmo member.

Blue Delmo U has short light brown hair. She is always seen in her Blue Delmo uniform.

During the events of Trial 4, Blue Delmo U was part of the Blue Delmo group which captured Rion and Gozo Aida during their attempt to infiltrate Hagen's ship. She was knocked down when Rion and Gozou escaped from them.

During the events of Trial 6, Blue Delmo U was part of the Blue Delmo squad which barricaded themselves in a corridor in order to stop Aika from pushing deeper into the base, towards the Delmo Commander's office. She is seen standing in a center of the second line with her hand pointing forward, and she is the only one who doesn't hold a weapon.

However, she and her comrades were unable to hold Aika, as Aika during her charge shots her, Blue Delmo W and other Blue Delmo standing in back line with her stun gun, rendering them unconscious. After that she knocks down Blue Delmo T by falling on top of her back and disables Blue Delmo S and Blue Delmo B with precise blows to their necks, using both her hands. Finally, Aika hastily disables Blue Delmo C by landing a devastating hit to the helpless girl's neck with none other than her foot, sending her gasping as she arches her back and lifts her butt. In the result all 4 girls who were standing in front line simultaneously crumble as they fall unconscious. 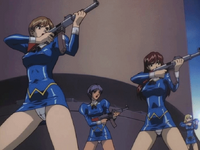 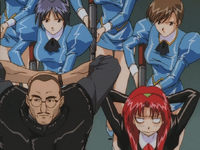 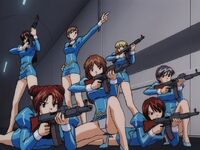 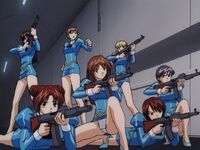 Blue Delmo U and her comrades as they realize it's not that easy to stop Aika.
Retrieved from "https://aika.fandom.com/wiki/Blue_Delmo_U?oldid=9566"
Community content is available under CC-BY-SA unless otherwise noted.