A bunch of senior students who are under the control of Risako Nagisa While Aika and Eri Shinkai are distracted by Midori, Aki, and Kyoko, whose unconscious bodies they analyze in the medical bay, Risako gets more students as backup to keep Aika and Eri at bay. They first attacked at a distance but soon charged in when their cover was blown.

She wears a white hip-length dress with green details, and under appears to have normal panties.

She' the first to attack but misses. Once all her friends, except Karate Girl, have been knocked out she becames scared and hesitates to take Aika on. However, it's not long before Aika hastily closes the distance between them, jumps on top of her shoulders and knock her out with a brutal frankenstiner.

Red haired girl who wears a short grey chinese-style dress with yellow and red details. It's open almost to the waist on the sides to allow free movement of the legs, since she's quite a close combat specialist, though it does her no good in the end.

She's the only one that doesn't use a weapon. As she shows off her skills, she is hit by a golf club in the head before she can even start.

Showing off her abilites

And it hits right on

Not much fighting to be done now

She's the girl who used a tranquilliser rifle to take out the girls at the party including Eri Shinkai. Gust is used to lure her out, and once her cover is blown she is shot down by Aika. Her unconscious body slumps over a rock behind which she was hiding, exposing her butt.

She tries to ambush Aika from behind, but she easily blocks her attack and quickly shoots her between her exposed breasts.

Big breasted brunette girl who sports a one piece lavender swimsuit with little ribbons as details.

She first tries to land a couple of kicks on Aika and, when that fails, attacks her repeatedly with her prod. However, Aika grabs the prod, hits her with an elbow to the face, kicks her right between the breasts and finally finishes her off with a shot, which sends her flying backwards.

Blonde suntanned girl who wears a grey bikini with a sports top.

She charges at Aika after she disposes of Lavender, but is distracted by the latter's prod being thrown at her. In the brief second she isn't looking Aika jums abover her and shots her. She jerks as the dark hits her and then falls to the ground unconscious, face down and legs wide spread.

She is the only one in which we can actually see the mind controlling device (as she charges Aika after Lavender's defeat).

She teams up with white two piece until the latter is defeated. At first she tries jumping in the air to stomp on Aika but misses. She then tries to sneak behind her, but Aika evades the attack and she ends up being hit with an orange thrown by Karen square in the forehead. This allows Aika to take the advantage and beat her with a quick succesion of blows to the face as she is trying to recover from the impact. The final kick sends her flying several feet thought the air until she falls to the gound with her legs wide spread and barely conscious, but still makes an attemp to get up before being hit in the head by another orange. She then finally crumbles with a moan, knocked out for good.

Big breasted brunette girl who wears a white bikini with lavender details, whose prominent characteristic is that it's top goes all the way up to her neck, where it ends in a little bowtie, and has a big slit around the cleavage area.

When Aika was distracted she tried to use a suplex move but as she was doing it, she got knocked out by a sea shell thrown to her face by Karen with a golf club. She then lands on the floor head first, hitting her neck, and with her legs slumping over her face and breasts, being left in a fairly awkward position.

Afthe their defeat, the 8 knocked out girls are retrieved and carried to the ship by the male crew. They are then laid out in the storeroom along with the bodies of Risako Nagisa and Midori, Aki, and Kyoko, the upper parts of their bathing suits removed, and both their hands and legs tied. Since, just like the previous 3, they are nothing more than brainwashed innocent girls, the treatment they receive seems rathers harsh.

We can expect them to remain like this for whole time it takes for the mind controlling devices to wear off. 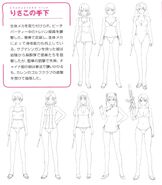 Add a photo to this gallery
Retrieved from "https://aika.fandom.com/wiki/Bikini_Squad?oldid=9317"
Community content is available under CC-BY-SA unless otherwise noted.