Ayumi has short light brown hair. Alongside her Black Delmo uniform, she is seen in casual clothes including white T-shirt under black top, blue jeans and brown flat heeled boots.

Ayumi was among the group of Black Delmo which attacked Aika and Gust in the underground parking lot, led by the Black Delmo Leader. She appears in the very beginning together with Black Delmo K, Rika and Black Delmo J. She tried to attack Gust but he easily managed to evade her and throw her to the ground head first in the process. Later she was knocked down either by Aika or by Gust, and is seen landing unconscious on top of the car near Black Delmo Leader.[1]

Afterwards, Ayumi reappears during the unsuccessful attempt by the Delmo Corps to eliminate Aika during her vacation at Peroronka Island. She is seen again as part of a Delmo group, this time led by Bianca, which confronts Aika in her hotel room, revealing their true identity. However, Aika manages to escape from them by jumping down from her room's balcony, freeing Rion Aida and Shuntaro Michikusa in the process, so Bianca's group begins a pursuit. After some running, Aika and her friends are forced to fight the Delmo in the hotel's kitchen, making quick work of all of them. Since the group seemed to be running away, Ayumi, who was leading the chasing Delmos, rushed into the dark room after them, confident they had the upper hand. It was only too late when she realized it was not actually so and she had in fact walked into a trap, just as Aika hit her square in the face with a demolishing blow which stops her right where she stands and sends her unceremoniously plumetting to the ground, knocked out for good. Thus, she was the first girl to fall. [2] 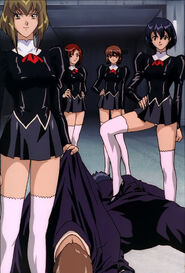 ...but Gusto throws her to the ground

Ayumi and her group chasing after Aika, Rion and Shuntaro

Ayumi leading the pursuit of the fugitives

Unsuspecting Ayumi about to enter the kitchen

The hunter becomes the hunted

It's always too late when you realize something's wrong

Ayumi falls to the ground, defeated

In the ending (first from the right)

Retrieved from "https://aika.fandom.com/wiki/Ayumi?oldid=9572"
Community content is available under CC-BY-SA unless otherwise noted.